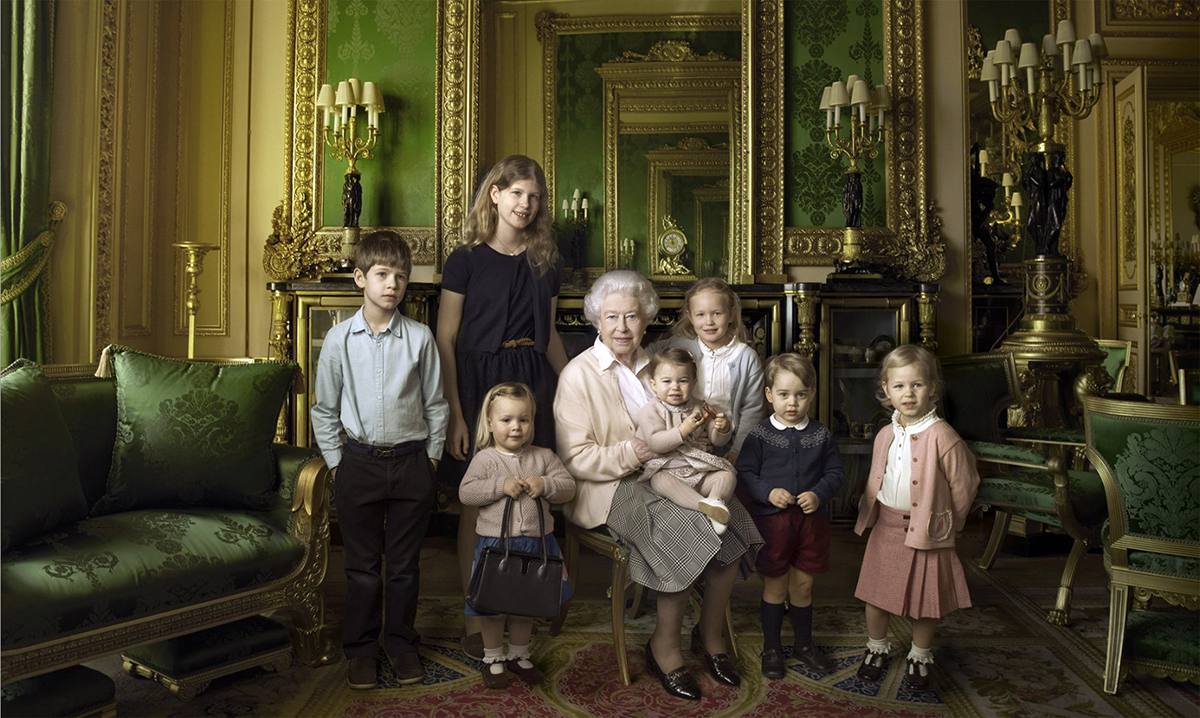 I work with photos every day in my graphic design projects. Sometimes they are provided by clients – amateur photos – and sometimes I commission a professional to take them.

When it comes to photos of people, i.e. portraits, I’m fussy! I like to insist on well-lit faces, natural expressions and a little je-ne-sais-quoi to intrigue the viewer. The human face is the most interesting subject. Why settle for anything less than excellence?

That’s why I was stopped dead in my tracks by the portrait of the Queen and some of her offspring (her two youngest grandchildren and five great-grandchildren) that was released last week to coincide with her 90th birthday celebration. It went so far beyond the mundane portrait you might expect on such an occasion. Look at it closely (click on the image, and images below). It reveals far more than it conceals. Here’s why the photo works so well: 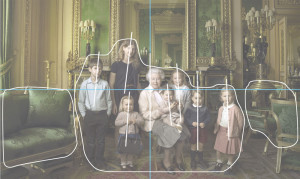 Composition: the composition is flawless. It’s asymmetric, but still balanced. The main subject is smack in the middle, which is an obvious technique. But she sits vertically, and most of the other subjects are angled slightly towards her, which also heightens her importance in the photo. It’s a posed royal portrait, but somehow without the usual formality and stuffiness. There’s visual variety too: the five central figures are all touching, the others are a few inches apart.

Lighting: all eight faces glow, but the Queen’s face, with that head of white hair, glows the brightest. It appears as if the light source is a window off-camera to the left (see the curtain?), but it is likely an expertly-controlled bounce flash, with all the softness of natural daylight. Everything but the people is in heavy shadow, although not so much that you can’t make out a lot of intricate details in the opulent furnishings. The lighting is so good it looks almost painterly, as if the illumination projects from the subjects themselves. 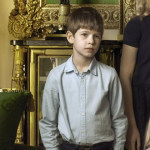 Faces: only one or two of the subjects are smiling to the point of teeth showing. No one yelled “Say Cheese!” for this photo. One subject looks pensive, almost sad (James, at the far left). The British press say he is a cautious and shy eight-year-old, and it shows, with his hands-in-pockets pose. All the children look at ease, allowing their essential personalities to show through. (Little George, second from the right and a future king, is said to be devilish – can you see that in his expression and preoccupation with something in his hands?) That’s a remarkable accomplishment with this many people in the photo. If the shoot extended to scores of takes to get this particular one, how did the photographer keep the kids happy and relaxed until this moment came along? Parents were present behind the camera apparently, which you can suspect because not all the children’s gazes are fixed directly at the lens. Finally, it appears that baby Charlotte was given something to play with – perhaps a toy, or maybe even her great-grandmother’s reading glasses!

Colours: the photo has a soft, desaturated colour palette for the subjects (pale colours), plus saturated gold, jade and brown for the background. It looks like it’s from another era, which is exactly the point, I expect — a portrait of a woman born in 1936, when these sorts of paler colours predominated. The only bright hue is the gold at the back left of the photo. It says “royal” quite boldly.

Clothes: I’m not a fashion designer, so I’m not really qualified to comment on the clothes, but they look like classic styles, even timeless. Can you buy clothes like this for kids today? (Yes, you can: the UK tabloids provide shopping tips.) Of course, the kids looked dressed up, but not to the point of uncomfortable. The creases in James’ shirt makes it look like he’s wearing suspenders, like a Dickensian street urchin. He doesn’t have a tie, a deliberate choice, I suspect, because he’s still a young lad. Lady Louise, beside him, is dressed more formally, because she’s older, a teenage girl on the cusp of womanhood.

Quirks: there are several other non-human elements to intrigue the eye, if you look closely. Notice the cascading double-mirror effect, stretching almost to infinity above the Queen’s head? It multiplies the candelabras, creating a  pleasing, diminishing effect, giving the otherwise flat photo great depth. There is a ninth “face” in the portrait, the clock in reflection. Somehow, neither the photographer nor any of her equipment appear in the mirrors, quite a technical feat. And the best part of the whole photo, the detail that made me laugh out loud … 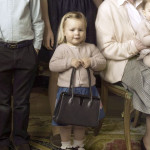 The Bag: Mia Tindall is holding the Queen’s ever-present handbag, the one she’s never been without since people started photographing her in 1953. I’m not sure it’s ever made it into an official portrait before, but that sort of bag is her signature accessory. Including it here adds a note of whimsy. Mia seems to be saying, “Don’t forget your bag, Granny!” It was apparently an unscripted moment, and it shows. It’s hard to fake spontaneity. In portraiture, a photographer has to be alert to the unexpected, revealing and fleeting moment, and take advantage. It brings truth to an otherwise scripted or contrived occasion.

Who is the skilled craftsperson that composed and executed this amazing photo? None other than Annie Leibovitz, the renowned American portrait photographer. She’s been shooting disarming photos of musicians and celebrities since the 1970s, for magazines like Rolling Stone and Vanity Fair (eg.: Demi Moore naked and pregnant; k.d. lang shaving Cindy Crawford in a barber’s chair; the cover of Bruce Springsteen’s Born in the USA CD).

Why did Buckingham Palace hire her to shoot the Queen for her birthday? Presumably, because she’s one of the best in the world at what she does. She created a portrait that shows the Queen as a normal human grandmother, at ease with her brood, no crown involved. It subtly contradicts the image of Elizabeth as the aloof matriarch we’ve come to believe in over the years, especially around the time of Diana’s death.

I don’t expect we can afford to hire Annie Leibovitz for your next project, but I will examine and critique your photos this closely before using them to convey your message.

There we go: a thousand words about a single photo.

(This post was revised and enlarged on April 30 to include observations made by my wife and my social media commenters. Thanks to them!)

4 thoughts on “What makes a great portrait?”