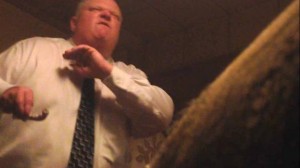 In many ways, it was a lousy photo: grainy, poorly lit, and the most unflattering portrait angle, shot from below. But none of that mattered. Finally, we had an image for the phenomenon everyone’s been talking about for a year: Rob Ford with crack pipe in hand.

The Globe plastered it on their front page, large. They admitted to paying $10,000 for a few video screen grabs, and almost apologized for the tawdriness of having to print it. Like they didn’t really want to stoop to tabloid style journalism.

That photo mattered more than so many rivers of ink that have been spilled on the Rob Ford fiasco up until now. Without the photo, there was always a degree of doubt, or at least detachment. The reader could imagine what was up, but everyone’s imagination is a little different. With the photo, the story gets unified and crystallized. It works on a more visceral level than words, no matter how well they’re crafted. Look, he’s smoking crack, in his sister’s basement. Maybe he just stopped by on his way home from the mayor’s office. What a sad moment for the city of Toronto.

It seems the Globe was offered the full video, for “six figures”. So was the U.S. website gawker.com, which published the first crack video revelations a year ago (albeit without any visual evidence to show, only their hearsay “we viewed a video” testimony).

For $10,000, the Globe got something that was almost as powerful as a video, at one-tenth the price. Good on them. They understood the power of a visual metaphor, whether stationary or moving. The video, if it’s still being shopped around, is probably worth a lot less now, because the visual story has been told. The seller didn’t really grasp this, I suspect.

Because of this photo, Rob Ford has had to take a leave of absence, to deal with his “alcohol addiction” problems. Yeah, what’s wrong with that picture?

I’m often after my graphic design clients to “tell a story” visually in their communications. Of course, I want to work with good copy and enticing headlines. But if we can add a relevant photo or illustration, then I can really pack a communications punch. 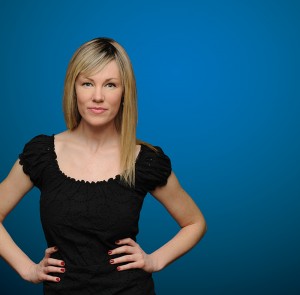 Here’s an example: Family & Children’s Services wanted to really show what they do with foster children, not just talk about it. So they convinced some of their clients to shed their anonymity and appear on camera. That’s Laura May at right (click on photo to enlarge). Here’s her story.

“Growing up, I never had a safe place to turn to. At 11, I lost my mother and grew up afraid to come home every day to a house of alcohol, violence and neglect. With no safe place to stay, I came into foster care with Family & Children Services of Guelph Wellington when I was 15, where I found a worker who was there for me. I found support, assistance and the life I wanted, waiting for me. Now, I have a university degree in social work and have been accepted to grad school. I’ve travelled around the world and I’m just getting started. Without Children’s Aid, I may not have been here to tell my story.”

The professionally shot photo combined with a raw personal story packed a wallop in the annual report I designed for F&CS. It says to the agency’s supporters and funders: here is what we do, these are the people we help, and it’s all very real and personal, isn’t it? You just can’t do that with words alone.

Every picture tells a story. Stock photos are better than nothing, but if you want to tell a true story with emotional punch, invest in good photography. It won’t even cost you $10,000!