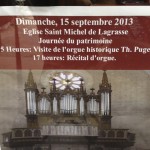 I just took a long vacation, in the Languedoc region of southern France. As always, I keep my eyes alert to graphic design when I travel. And I have to say, I was largely dissappointed this time around! The stylish French really failed me. Publicity for the places we visited was mostly uninspired (see poster at right), or even downright confusing. Signs and logos showed little imagination beyond common-place computer fonts.

But there were exceptions. Here’s a quick tour. (All images clickable.) 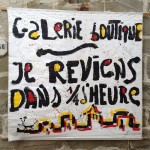 Just when I was most despairing (complaining about design to my spouse) I rounded a corner and spotted this huge hand-drawn poster (about 5 feet x 5 feet). The message wasn’t literal (the artist was in his shop), so I’m not sure of the significance of this phrase. He is an Occitan speaker (the old, regional language in southwestern France) and paints only with black, yellow, red (very Spanish influenced). 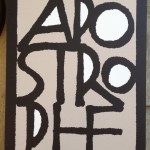 This logo / sign really stood out, for some sort of art gallery / café / performance space in Montolieu, the “village du livre” (15+ bookstores in a tiny rural village). Alas, the venue didn’t live up to its funky billing – it was derelict, empty, not worth the four-block detour the logo persuaded me to take! 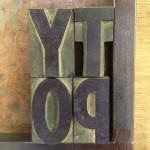 Also in Montolieu, the tiny museum had an amazing collection of ancient typesetting equipment, almost from Guttenberg forward. I’d heard about monotype, linotype, and of course lead type, but I loved seeing the old technology up close and personal. It took this gynormous machine (linotype, right) to produce professional type, as little as 50 years ago. 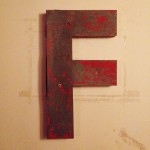 You know those restaurants where you can confuse the men’s and  women’s washrooms because the signs are so damned clever? Not here. As my (late) design colleague Dennis McGann used to say, “when in doubt, use big type.” Without doubt, this room is for women (femmes)! 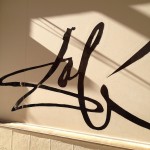 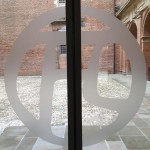 Here are the personal marks for two artists, Henri Toulouse-Lautrec (see his initials, HTL, in the etched glass window sign?) and Salvador Dalí. We visited museums dedicated to each artist, in their birthplaces (Toulouse, France and Figueres, Spain). Both museums used the marks to great effect – a no-brainer design wise, but still very effective. 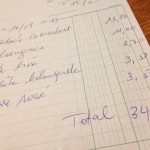 A Monday supper at this Limoux brasserie was largely a failure, except for the delightful handwritten “l’addition” (bill) we received at the end. This is classic French penmanship, especially the numerals, with the “1” receiving a larger serif than its stem, and loose accents all over the place. 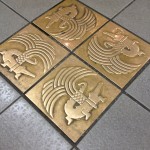 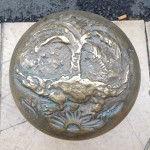 The Romans made the city of Nîmes one of their colonial capitals around the time of Christ. They settled retired soldiers from their recent Egyptian conquest there, who produced coins with a palm tree and crocodile as their emblem (logo), like this sidewalk post (left). Despite the incongruity of the symbols in southern France, they have held as the city’s graphic identity. On the right is the logo’s modern iteration, as a relief floor tile in the central indoor market. 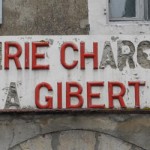 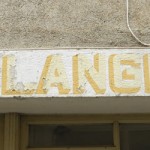 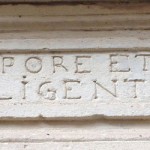 Even if the new signage mostly left me cold, I was drawn to the some old classics, in stone or faded paint. (“Tempore et Diligentia” is the slogan of Toulouse, Latin for “Time and Industry”.) It was plain evidence to me that while the computer has made the “how” of design a little easier, it has also largely robbed signmaking of its craft. The distressing of these old signs adds to their charm, but they were also good designs, beautifully executed, to begin with. None of the current signage came close. 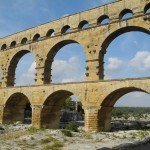 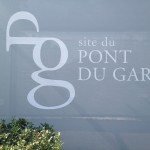 Finally, I flipped for the simplicity of this logo, at the Pont du Gard, near Nîmes. I think the bowls of the letters represent the arches of the famous bridge, and the tail of the “g” is the Gardon River, which the structure spans. The aqueduct was a design high-point of my vacation, a masterpiece of balance, proportion, colour and symmetry (not to mention engineering), from 2,000 years ago. (Trivia: the protruding stones were used to anchor the scaffolding as the bridge was being built, which took five years.)